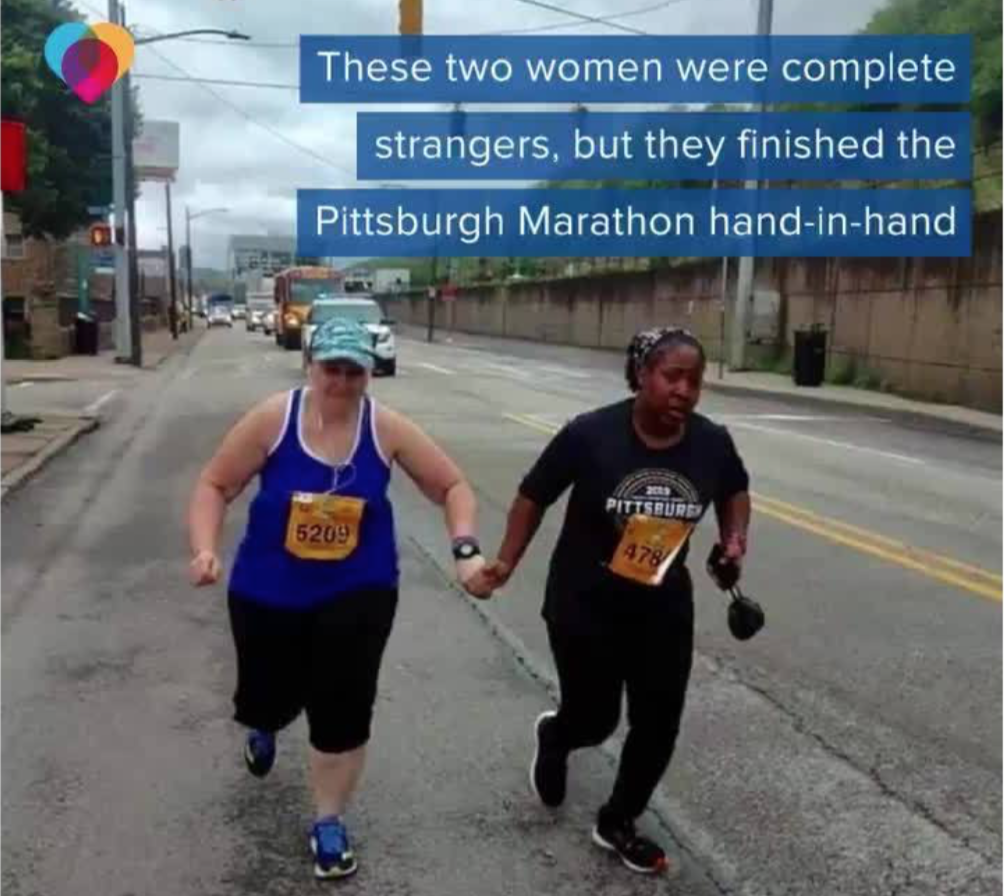 Laura Mazur and Jessica Robertson had never met before they reached the mile 14 marker at the Pittsburgh Marathon on May 5.  Mazur told NBC News she was feeling paranoid because she didn’t want to finish last. She turned around and noticed another runner, Robertson, was there as well.

Robertson said that she had been FaceTiming with her mother, feeling defeated and upset with her performance when she noticed Mazur beside her. The two began chatting and decided to buddy up and run the rest of the race together.

“I told her I’d stay with her if she stayed with me,” Mazur wrote in a Facebook post about the experience.

The two clicked instantly and encouraged each other along the way. Robertson, who was nervous about the possibility of not completing her first marathon said that Mazur’s words of encouragement kept her motivated and confident.

“You’re fine! I know you’re OK! There’s something in your mind, body and heart telling you you can do this,” Mazur said she told Robertson.

Mazur said that despite holding up the rear of the race, they were cheered along by spectators along the way, including a large cheering section at mile 25 of the 26.2 mile race.

“There was great crowd support,” Mazur said. “You feel like royalty. You feel like a real athlete. It’s super awesome to have people cheer you on.”

It was this encouragement that propelled them forward to finish the race.

As they were approaching the finish line, Robertson realized that they were no longer holding hands.

Robertson and Mazur were both overwhelmed with emotion after having finished the race together.

“It was so great that we got everything done and we were still together,” Mazur told NBC News. “We finished what we started.”

Mazur said she was unaware that someone had taken and posted the photo that quickly went viral.

Daniel Heckert told NBC News that he had just finished the half marathon part of the race, when he decided to cheer on his fellow runners at the mile 25 marker.

“This is what the Pittsburgh running community is all about,” Heckert wrote in a post on Facebook about the photo he took. “I am constantly in awe about how much of a family this group is and how rewarding it is to cheer other runners along their journey.”

A spokesperson for the Pittsburgh Marathon told NBC News in a statement, “The two women who crossed the finish line last at this weekend’s Dick’s Sporting Goods Pittsburgh Marathon truly showcase the spirit of Pittsburgh: neighbors helping neighbors through thick and thin. We are proud to be part of their amazing accomplishment in finishing a marathon and that we were able to give the last runners the same experience as those who crossed the finish line first.”

Mazur said she has been encouraged by all of the positive reactions the photo has received online, adding that she never expected it to go viral.

“The running community is a great community to be a part of,” Mazur said. “It lifts so many people up. There are so many supportive people. … There’s always someone there for you.”

“I was surprised. I was in awe,” Robertson added about the photo going viral. “I was still wrapping my head around the fact that I accomplished [my] goal, that I crossed the finish line.”

RITE Academy salutes these brave women. They surely used their Emotional Intelligence to show care and compassion for one another, that helped them cross the finish line together.