“Mayor, New Police Chief, Police Department, and Community working together is a recipe for healing what may be broken. Way to take a pro-active response to repair and improve community relations.

When police officers resign due to a bad work environment, this should be eye opener to the department, as well as how this will reflect back on the community. Town leadership and Mounds, IL Police Department certainly recognized the need for change.” – Linda Webb, Founder RITE Academy 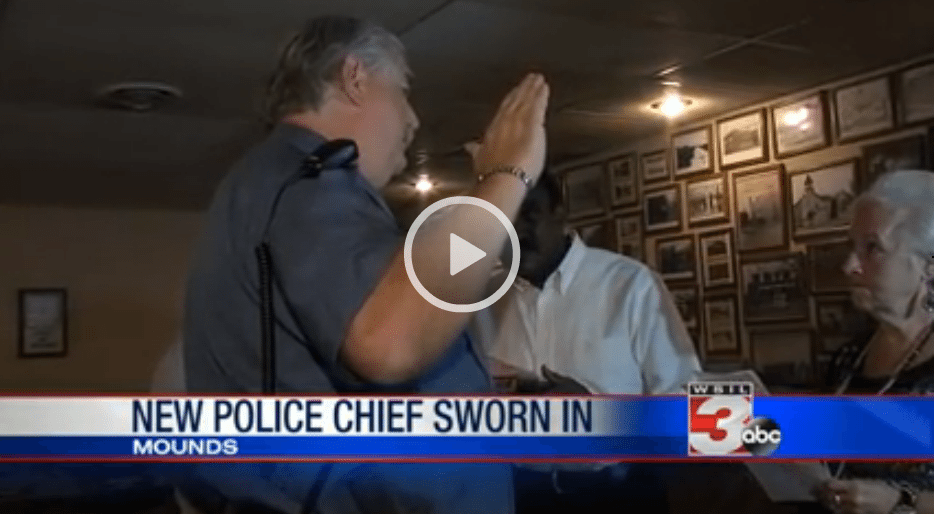 MOUNDS — Mounds Police Chief Lloyd Boseker has turned in his letter of resignation after a several week suspension for his involvement in a bar fight.

Town officials called Boseker hot-headed and difficult to work with. They view his resignation, and a new chief, as the next step to moving on.

“I promise to serve to the best of my ability,” Riddle said during his swearing in. Riddle takes over a police department suffering from low morale and a lack of team spirit.

“You almost feel like you’re incarcerated in your own home. At least that’s the way I feel. I keep my doors locked,” said Patricia Shipp, a local resident.

“It’s going to take the whole community to get back on track,” Riddle said.

“We all just felt like he didn’t present himself as chief of police in that respect. And I just didn’t feel like we could go on,” said Mounds Mayor Rita Flummer.

Flummer says the former chief left the department in shambles. “The morale at the police department, was bad,” Flummer said.

She remains confident Riddle will help the force recover, and said he has a tough job ahead.

“You worry about break-ins and stuff like that. At least we do.
My son says be sure to keep the door locked,” said Dallas Jackson, a local resident.

Riddle says he’ll stay open to suggestions from the community and hopes to repair the relationship between police, the city and it’s citizens – through transparency.

“We will work on that,” Riddle said.

The Union County States Attorney has not yet said whether he will press charges against the former Mounds Police Chief.

Several residents suggested the city install more street lamps to light up the town at night.

MOUNDS — Lloyd Bosecker has resigned as police chief of Mounds.

Bosecker turned in his letter of resignation Wednesday morning. He is currently under investigation for his role in a fight earlier this month at Club 37 in Olmsted.

Mounds officer Terry Riddle was sworn in as chief Wednesday by Mayor Rita Flummer. Flummer says she hopes to restore morale in the department after three officers quit in recent weeks.

Chief Riddle is accepting applications to fill those positions.

Hear from Riddle and Mayor Flummer tonight on News 3.