RAOK – The Random Act of Kindness between one citizen and one police officer, is enough to start the positive shift towards the Racial Intelligence we all need. It is incredibly refreshing to read about this kind and helpful exchange between police and community, and for the media to write about something good.

Police officers in Houston, Texas seem to be living in constant fear especially after the cold-blooded murder of Deputy Sheriff Darren Goforth at a gas station in Houston. In such testing times, a teen has been hailed as a ‘hero’ for offering to protect an officer at a gas station.

Recently, when officer Tommi Jones Kelley was filling gas in her patrol car at a station in Houston, she realised that someone was standing behind her and turned around to find Mckinley Zoellner.

Kelley in a post on her Facebook account said, the boy, whom she had “never met before”, offered to stand behind her while she filled her tank.

“Ma’am, do u mind if I stand here behind you while you get your gas?” the boy asked the officer. Responding to Kelley’s answer why he would want to do that, Zoellner said “to make sure you stay safe.” 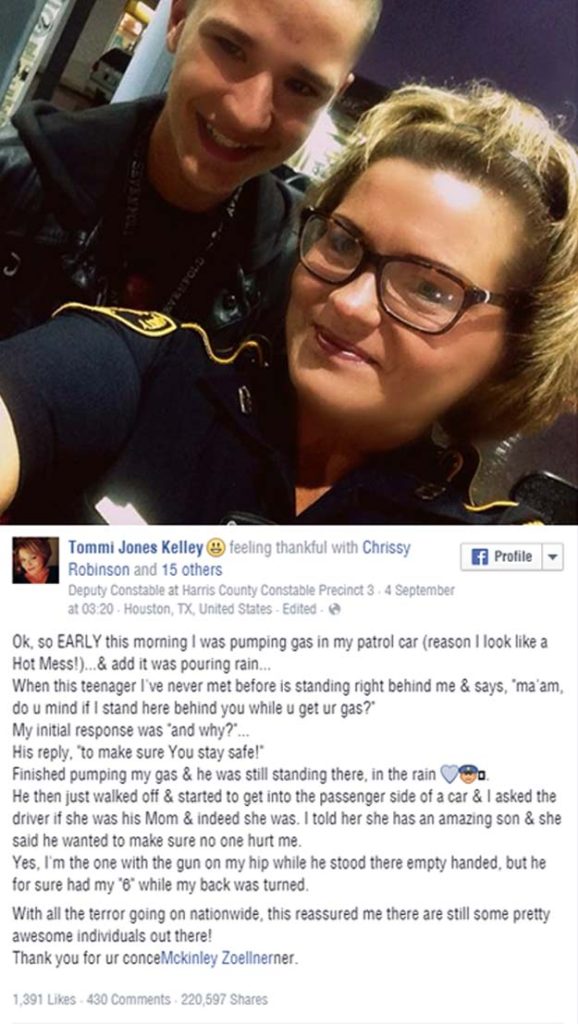 After she finished filling gas, Kelley noticed that he was still standing there, covering her in the rain. After that, Zoellner just walked off and sat in the car which his mother was driving.

Kelley went over to Zoellner’s mother to thank both of them, and then took a selfie with him which she later posted on Facebook.

The story has gone viral on social media and both officers and citizens are hailing Zoellner as hero, in the backdrop of the “execution-style” murder of Houston sheriff’s deputy Darren Goforth last month at a gas station.

Referring to the Goforth’s death, Kelley in her post said, “With all the terror going on nationwide, this reassured me that there are still some pretty awesome individuals out there.”

Appreciating Zoellner’s act, the officer said although she was the one with a gun, the boy stood there empty handed and had her back covered while she was pumping gas.