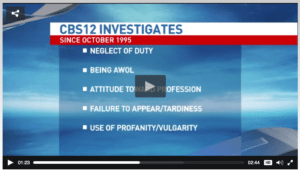 RIVIERA BEACH (CBS12) — New information has come to light about a Riviera beach police sergeant who was caught on video in a dispute with a veteran over a handicapped parking spot.

The video shows Wilson and a disabled veteran in a heated exchange August 9 over a handicapped parking spot at a Walgreens.

At one point Wilson knocks the cell phone out of the veteran’s hands.

We checked his personnel file.

It shows since Wilson was hired by Riviera beach Police in October 1995, he has been disciplined 29 times.

He has been disciplined for a variety of things, such as  neglect of duty, being AWOL, attitude toward profession, failure to appear/tardiness, use of profanity/vulgarity, professionalism, criticism of orders or policies, and loafing/inattention to duties/procedures.

In January of this year, he was found to have violated department policies including neglect of duty,  job knowledge and skills, knowledge of rules and regulations, and failure to maintain and demonstrate knowledge. He was  given 48 hours suspension, 6 months’ probation and ordered to take an 8 hour course for front-line supervisors.

Riviera Beach Police Chief Clarence D. Williams said in a memo to  City Manager Ruth Jones in January,  “any infractions will result in administrative sanctions up to an including termination and demotion.”

We asked Roseanne Brown, Riviera Beach Police spokeswoman,  how someone who has been disciplined 29 times could still be working for the police department.

Sgt. Wilson is currently on paid administrative leave in connection with the August 9 incident with the veteran.