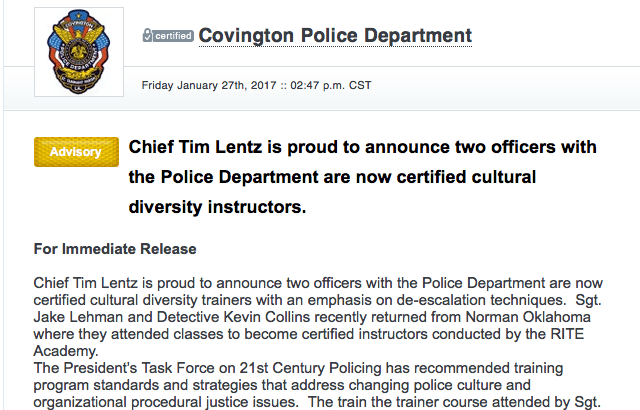 “The idea is to de-escalate whenever possible – which in turn will reduce use of force incidents.”

Chief Tim Lentz is proud to announce two officers with the Police Department are now certified cultural diversity trainers with an emphasis on de-escalation techniques.  Sgt. Jake Lehman and Detective Kevin Collins recently returned from Norman Oklahoma where they attended classes to become certified instructors conducted by the RITE Academy.

After Chief Lentz was appointed Chief of Police, he recognized the importance in educating his force on the importance of cultural diversity by bringing in nationally recognized expert Capt. Michael Crawford.   Now with two certified instructors on staff, training can be implemented more frequently and more convenient to our officers. As previously mentioned, as we build our community relationships, we build public trust. Read more

By Kim Chatelain, NOLA.com | The Times-Picayune

Two Covington Police officers have been certified as cultural diversity trainers and will work with other members of the department to improve relations with the community and learn to “de-escalate high pressure situations,” Chief Tim Lentz said.

Lentz said RITE Academy, which specializes in cultural diversity training for law enforcement and public service professionals, claims their teachings fall in line with the recommendations of the 21st Century Policing Initiative. That initiative stems from recommendations from the White House Task Force on 21st Century Policing launched in 2015 to help improve relations between police and communities.

The course taken by Lehman and Collins teaches officers to gauge their emotional state so they do not react negatively, especially in high-pressure situations. The two officers will train their colleagues how to be aware of their emotions in various situations, and focus on how the officer feels so he or she can improve their reactions.

[bctt tweet=”The idea is to de-escalate whenever possible – which in turn will reduce use of force incidents.” username=”RiteAcademy”]

Lentz said in a news release issued Friday (Jan. 26). The RITE Academy is state accredited and nationally certified. The chief said after the Mardi Gras parade season, all Covington officers will be re-trained in cultural diversity by Collins and Lehman. “We will also provide a similar training to our community leaders. As previously mentioned, as we build our community relationships, we build public trust.” Read more

See our EVENTS page for a training near you, or become a Host site! Contact us about TRAINING for your agency. For references and other information, Click our FAQ page