Why Blame can’t move us forward 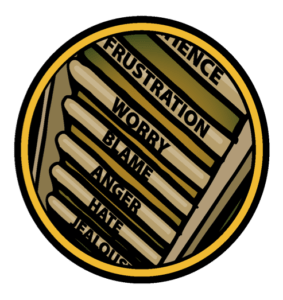 Continuing to blame the police, the government, our past actions, communities, etc., keeps us from moving forward. BLAME, is one of the elements we teach in our officer Racial Intelligence Training class. Blame sits at the bottom of RITE’s Emotional Energy Ladder™ for one good reason… it will always keep us down!

BLAME, ANGER and HATE are:

When you learn to climb to the top of the Emotional Energy Ladder™, you’ll find the emotions of LOVE, GRATITUDE and JOY live there. Just think of anyone in your life, that has a “glass half full”, or a “sky mostly sunny” attitude, and you’ll see they live at the top of the Ladder.

LOVE, GRATITUDE and JOY are:

As Chief Cunningham talks about, it’s time to move from our past, into doing whats right for today. You can start by becoming aware of where you are on Your Ladder…

Below is Chief Cunningham’s talk and YouTube video at the annual IACP annual conference, as well as comments from Chief Delrish Moss and Chief David Alexander. Watch it, read it, pass it on!

Terrence Cunningham, president of the International Association of Chiefs of Police, told officials at the group’s annual conference that police have historically been a face of oppression in enforcing laws that ensure legalized discrimination and denial of basic rights.

While apologizing for past actions, Cunningham said today’s officers are not to blame for those injustices. He did not speak in detail about modern policing, but said events over the past several years have undermined public trust. 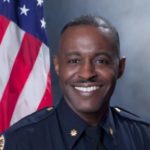 Delrish Moss, who has been police chief of Ferguson, Missouri, since May and is black, said he had negative encounters with police when he was growing up, including being called racial epithets. 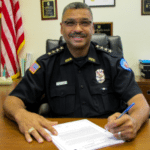 “When you don’t know the history and you say, ‘Well, there is no problem,’ then you pretty much present yourself as insensitive to the issues,” said Alexander, who is black. “The issue of racial tension has been a part of American history since its settlement.”

Read Cunningham’s full remarks from the video below:

I would like to take a moment to address a significant and fundamental issue confronting our profession, particularly within the United States. Clearly, this is a challenging time for policing. Events over the past several years have caused many to question the actions of our officers and has tragically undermined the trust that the public must and should have in their police departments. At times such as this, it is our role as leaders to assess the situation and take the steps necessary to move forward.

This morning, I would like to address one issue that I believe will help both our profession and our communities. The history of the law enforcement profession is replete with examples of bravery, self-sacrifice, and service to the community. At its core, policing is a noble profession made up of women and men who have sworn to place themselves between the innocent and those who seek to do them harm.

Over the years, thousands of police officers have laid down their lives for their fellow citizens while hundreds of thousands more have been injured while protecting their communities. The nation owes all of those officers, as well as those who are still on patrol today, an enormous debt of gratitude.

At the same time, it is also clear that the history of policing has also had darker periods.

There have been times when law enforcement officers, because of the laws enacted by federal, state, and local governments, have been the face of oppression for far too many of our fellow citizens. In the past, the laws adopted by our society have required police officers to perform many unpalatable tasks, such as ensuring legalized discrimination or even denying the basic rights of citizenship to many of our fellow Americans.

While this is no longer the case, this dark side of our shared history has created a multigenerational ― almost inherited ― mistrust between many communities of color and their law enforcement agencies.

Many officers who do not share this common heritage often struggle to comprehend the reasons behind this historic mistrust. As a result, they are often unable to bridge this gap and connect with some segments of their communities.

While we obviously cannot change the past, it is clear that we must change the future. We must move forward together to build a shared understanding. We must forge a path that allows us to move beyond our history and identify common solutions to better protect our communities.

For our part, the first step in this process is for law enforcement and the IACP to acknowledge and apologize for the actions of the past and the role that our profession has played in society’s historical mistreatment of communities of color.

At the same time, those who denounce the police must also acknowledge that today’s officers are not to blame for the injustices of the past. If either side in this debate fails to acknowledge these fundamental truths, we will be unlikely to move past them.

Overcoming this historic mistrust requires that we must move forward together in an atmosphere of mutual respect. All members of our society must realize that we have a mutual obligation to work together to ensure fairness, dignity, security, and justice.

It is my hope that, by working together, we can break this historic cycle of mistrust and build a better and safer future for us all.

RITE Training helps officers improve communication to avoid the Block-out Syndrome, to De-escalate situations, build Career resiliency, Leadership skills, and Departmental recruiting. See our EVENTS page for a training near you, or ASK US how you can become a Host site!