Chief Thomas Phillips has a game plan. As the leader of NIU’s Department of Police and Public Safety, Phillips strives to ensure that his team is ready to protect and serve NIU students, employees and community members in DeKalb.

“Training our officers is a key part of what we do,” Chief Phillips said. “We are always looking for ways to strengthen our skills and develop new skills so we are operating at the highest level possible.”

With that in mind, Phillips reached out to the Racial Intelligence Training and Engagement (RITE) Academy, an Orlando-based company that provides innovative training specifically for the public safety sector. Founded in 2015 by a retired police officer, the academy aims to give officers the tools they need for improved communication in the department and in the community.

Racial intelligence training is based on the premise that officers need to be aware of their personal biases in order to effectively deal with others. The training sessions aim to help law enforcement officials better understand their own biases which then improve their interactions with the public.

[bctt tweet=”“The RITE program is cutting edge,” Chief Phillips said. “The main focus of the training is self-awareness; the first step to overcoming biases is to be honest about them.”” username=”RiteAcademy”]

Along with being honest and self-aware, the Racial Intelligence Training and Engagement (RITE) program points to officer wellness as being paramount.

In 2016, Wilson was the first NIU officer to enroll in the Racial Intelligence Training and Engagement (RITE) program, and Officer Rob Williams followed shortly after.

“Our goal is to ensure that our officers are as prepared as they can be to handle any situation that arises,” Chief Phillips said. “This training is beneficial in meeting that goal.”

“It reminds us what the relationship is supposed to be between the police and the community,” Wilson said.

Over the past two years, Wilson and Williams have trained more than 40 sworn NIU police officers as well as law enforcement officials from the cities of DeKalb and Sycamore.

And it didn’t stop there. 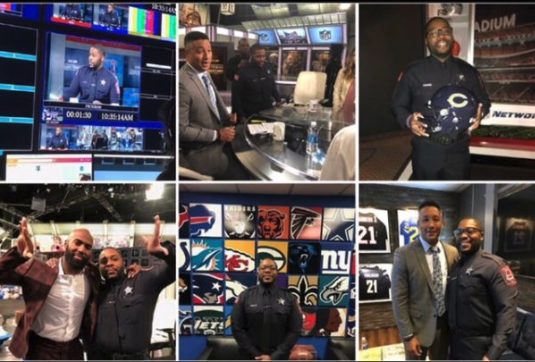 Members of the NFL learned about the training program and realized it could benefit their players as well. Officer Wilson was invited to participate in panel discussions with the NFL Players Coalition, sharing what she learned about racial intelligence.

Officer Williams teamed up with the NFL Network to share his expertise on racial intelligence. He talked specifically about NIU police officers’ ongoing training, and how they take what they learned about racial intelligence and use it in the community they serve.