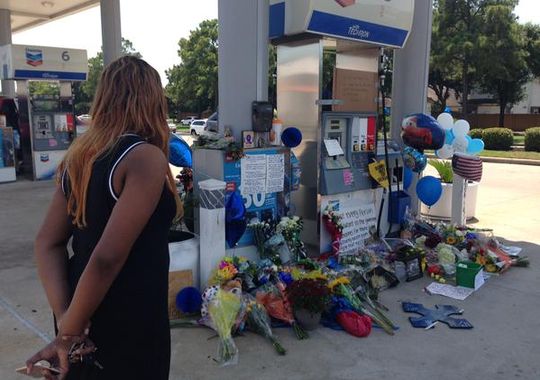 As word spread of the deputy’s death, mothers and fathers brought their children to lay flowers at the base of the gas pump. Grown men and women wept and prayed, KHOU-TV reports.

Several of the people who came to the pay their respects were especially disturbed by the sudden and perplexing circumstances of his death.

“I mean, he was doing his job, but he was just standing there,” said Barbara Adams, who lives nearby. “The cold-bloodedness of it really hit me.”

Harris County authorities in Texas have a man in custody in Friday’s shooting death of a sheriff’s deputy, Sheriff Ron Hickman said at a press conference Saturday. The suspect, Shannon J. Miles, has a previous criminal history including resisting arrest and disorderly conduct with a firearm. He is being charged with capital murder.

Hickman says the shooting was “unprovoked” and the department is still looking for a motive for the “cold-blooded assassination” of the officer at a Houston-area gas station.

Deputy Darren Goforth, 47, was fatally shot in the back late Friday while filling his patrol car in northwest Harris County. Hickman said ballistics tests showed a match between the weapon used to kill Goforth and a weapon in Miles’ possession.

Hickman, in discussing the shooting with reporters at an earlier press conference, condemned the “very dangerous national rhetoric” about police officers that he said was out of control.

Officials said Miles is the individual captured on surveillance video. He was apprehended, Hickman said, by locating the red Ford pick-up scene on the surveillance video, which was parked near where Miles resided.

On the video, the dark-skinned man is shown approaching Goforth from behind and shooting him several times in the back. The shooter continued to fire even after the officer had fallen to the ground.

Hickman said Goforth was apparently singled out only because he was wearing the uniform of a law enforcement officer. The sheriff made it clear he felt the shooting was tied to a national backlash over several recent killings of unarmed black people by police officers.

“When rhetoric ramps up to the point where cold-blooded assassination has happened, this rhetoric has gotten out of control,” he said. “We heard ‘black lives matter.’ All lives matter. Well, cops’ lives matter too, so why don’t we drop the qualifier and say ‘lives matter’ and take that to the bank.”

His remarks echoed comments in the same new conference by Harris County District Attorney Devon Anderson, who said the criticism of police had gotten out of hand.

“It is time for the silent majority in this country to support law enforcement,” she told reporters at a news conference. “There are a few bad apples in every profession, that does not mean there should be open warfare on law enforcement.”

Goforth was a 10-year veteran with the sheriff’s office, working the west district patrol division. He leaves behind a wife and two children.

Hickman said in his 45 years of law enforcement, he can’t recall another incident “this cold blooded and cowardly.”

“This is an act of cowardice and brutality, the likes of which I’ve never seen,” Anderson said earlier Saturday. “We will use all our resources to prosecute him to the fullest extent of the law.”