“Kudos to the diverse 16-person Ferguson commission for taking a positive stance. Publishing the Report to help the supportive community and the brave police will build bridges ahead.

We applaud the Ferguson Community, and surrounding police agencies, and lend our support as well. It’s crucial to offer unique tools that the police and community can use in building Racial Intelligence Awareness.” – Linda Webb, Founder, RITE Academy 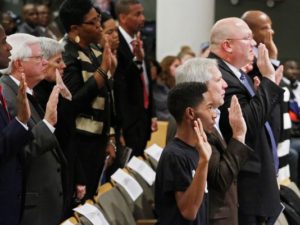 But the incident, which garnered international attention, put the focus on the long festering problem of racial inequity in St. Louis, where black residents have complained they have been disproportionately targeted by police and municipalities looking to raise revenue to keep their cities afloat.

The 16-member commission said it set out to be “unflinching” in assessing St. Louis’ problems and coming up with an outline of solutions.

“We present this report with the realization and understanding it reveals uncomfortable truths about this region we all call home,” said Rich McClure, a commission co-chairman.

The commission, which was made up of law enforcement officials, activists, business leaders, educators and the clergy, offers some bleak realities about racial disparities in St. Louis and Missouri.

Life expectancy differs by nearly 40 years depending on Zip code. In mostly white, suburban Wildwood, the life expectancy is 91.4 years. In the mostly black, inner-ring suburb of Kinloch, Mo., life expectancy is just 55.9 years. Black motorists are 75% more likely to be pulled over by a police during a traffic stop than white motorists. And more than 14% of black elementary school students were suspended last year, compared to 1.3% of their white peers.

“The law says all citizens are equal,” the commission writes. “But the data says not everyone is treated that way.”

While the commission offers 189 policy recommendations, it doesn’t try to dive into implementation, noting that legislation, funding and further public debate will be needed to make many of the changes the panel suggests. The commission said it was charged by the governor with identifying needed changes and “serve as a springboard” to spurring changes.

Starsky Wilson, the other co-chairman of the commission, said it was now up to the community to hold civic leaders and politicians accountable to make changes.

“Those who ask for our votes and will come knocking between now and next November should account for how they align with the community’s stated agenda,” Wilson said.

Nixon told commission members at event in St. Louis on Monday that their recommendations would not collect dust on a shelf.

“I commit to you today that these efforts will not be in vain,” Nixon said.