“Whether on the football field, or in the community, acts of violence have no place. From executive leaders, to police chiefs, to athletic coaches, Racial Intelligence mentorship starts at the top.

Opportunities to be a good mentor, strong leader, and impressionable coach, are all around us. It’s up to each one of us to project sportsmanship on and off the field. Take responsibility and Do the RITE thing with respect to others, regardless if you agree with them or not.” – Linda Webb, Founder of RITE Academy 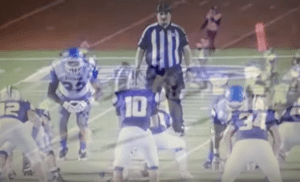 The case of two Texas high school football players who have been accused of intentionally colliding into a referee will be treated as an “assault on a school official,” school district officials said at a news conference today.

During Friday night’s game, “two players from John Jay High School targeted one of the game officials and blindsided him, knocking him to the ground,” the Marble Falls Police Department said.

The John Jay High School players, who have been suspended from the school and the football team, will not be named because they are minors, officials from the Northside Independent School District said. The school’s football season will not be canceled, the officials added.

“The incident is shameful to us,” Superintendent Brian Woods said today. “And yet in no way does it reflect what we stand for in our school district.”

Pascual Gonzalez, a spokesman for the Northside Independent School District, said the players were frustrated by what they thought were wrong calls.

The players also “allege racial slurs were directed at them by the umpire,” he said, adding that the district is investigating that charge.

Woods said the two players will receive a disciplinary hearing, adding that the district will also file a complaint about the racial slur allegation with the Texas Association of Sports Officials.

Additionally, “The students allege that an assistant coach said, ‘That guy needs to pay for cheating us,’ or words to that effect,” Gonzalez said.

The umpire told texashsfootball.com, “I like to keep my officiating quiet,” but “Libel and slander have already been committed against me. I will be contacting the appropriate people soon and any statement from me will come at a later date.”

Meanwhile, the NFL Referees Association has condemned the actions of the players who police say “targeted” and “blindsided” a referee on a field in Marble Falls, Texas.

Jim Quirk, executive director of the NFL Referees Association, said, “I’ve never seen anything like this in all my years of officiating at the high school, collegiate or professional level.”

“These types of actions against any game official at any level are inexcusable,” Quirk added. “We fully support the suspensions of the players involved, along with a full and complete investigation by the Texas University Interscholastic League (UIL).”

The incident was caught on video and is being investigated by the Marble Falls Police Department. No arrests have been made, although both students have been suspended. The name of the referee has not been released.

Two other Jay players had been ejected on separate plays before the referee was knocked to the ground. The game was against Marble Falls High School in Marble Falls, about 90 miles north of San Antonio. The Jays lost 15-9.

Texas Association of Sports Officials said in a statement today: “TASO has been involved in the San Antonio John Jay High School situation since Saturday morning, September 5th and continues to work with our members, the school officials and the UIL to gather the facts and bring this matter to a satisfactory conclusion.”

“Until all of the facts are gathered TASO will have no further comments,” the association added. “Both students have been suspended from the football team as well as from school,” Gonzalez said in an earlier statement to ABC News of the two who went after the referee.

The University Interscholastic League said it is “extremely concerned about the actions portrayed in the football game between Marble Falls and San Antonio Jay.”

“The League is working with the school districts and officials involved to conduct a thorough investigation,” the UIL said in a statement. “The UIL takes this matter very seriously and will take appropriate action once the investigation is complete.”

The Associated Press contributed to this report.